Karastan Area Rugs: A Name Woven With History and Tradition 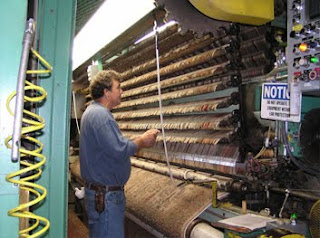 The saga of gorgeous Karastan area rugs began in a North Carolina mill during the 1920’s. Marshall Field & Co. created an exciting and innovative product that really was a revolution in the industry—machine-made oriental rugs. Specifically, the first Karastan rug came off the loom at 2:02 p.m., April 8, 1928. The company’s  goal was to make high-quality rugs at affordable prices, and if you know anything about modern Karastan area rugs, you’re sure to see they’ve really lived up to that mantra. These elegant new rugs were almost impossible to distinguish from the highly expensive, imported rugs.

They were introduced by Wanamaker’s New York department store in 1928 and the brand was born. At the time, the advanced manufacturing process was referred to in trade papers as “Mystery Rugs”. To shed some light the “mystery” for the public, Karastan created a large version of its Kirman pattern for the 1933 World’ Fair in Chicago. But instead of putting it in a glass display, Karastan invited attendees to walk on it. More than 5 million people left their footprints, spills, and food stains all over the rug. They cleaned half the rug so people could truly witness it’s recovery. They then became known as “The Wonder Rugs of America”.